Return form will be sent to your email Id:
Want this item in next 24 hours?
Get an instant SMS with a link to download the Snapdeal App
+91
Please Enter a Valid 10 Digit Number.
Yes, Send Me A Link To The App
GET SMS
SDL497436797
{"SDL497436797":null}
Home
364, 375, 46102936, ,
/
Books
/
Competitive Exams
/
Civil Services Exams
/
Ethics, Integrity and Aptitude
Compare Products
Clear All
Let's Compare!
Selection Error!
You have reached the maximum number of selection. You can select only upto 4 items to compare.
You have already selected this product.
OK
View Order 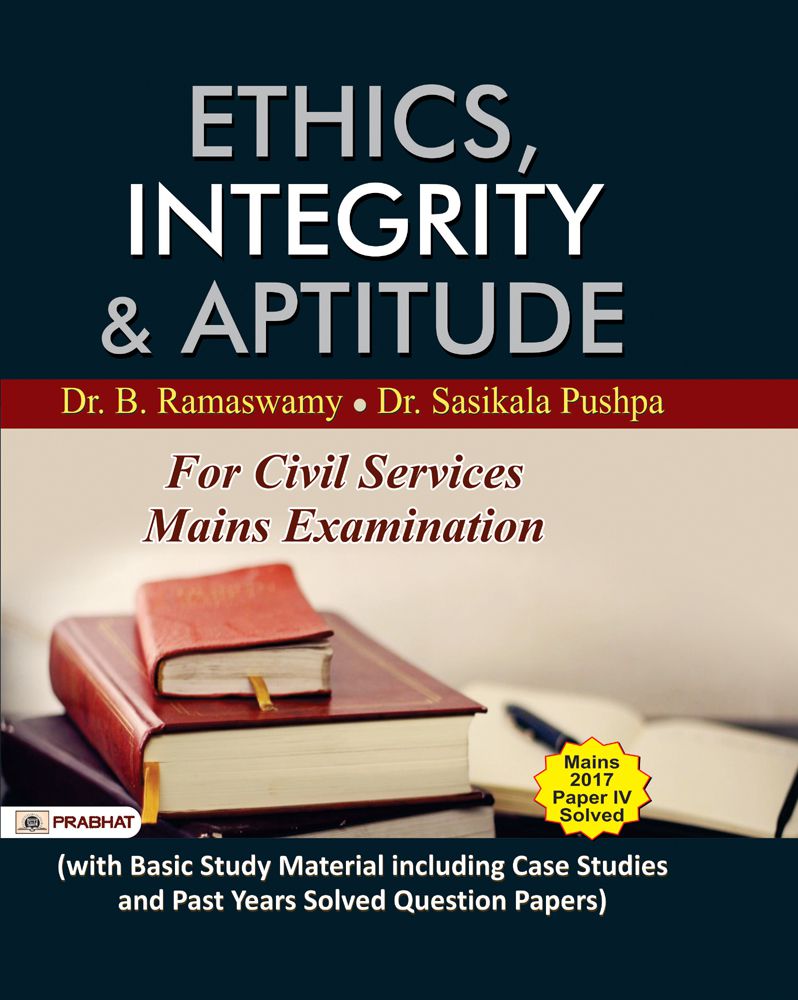 This book boasts of presenting IAS aspirants with maximum number of case studies  presented at one place in this Paper till date. The right way to answer case-study  questions are also given so as to facilitate the UPSC candidates to the maximum for  scoring best possible marks in this rather difficult paper. Various appendices are given to acquaint UPSC candidates with primary sources of information on this theme, such as, Right to Public Services Legislation in India; The Right of Citizens for Time Bound Delivery of Goods and Services and Redressal of Their Grievances Bill, 2011; India’s Citizen’s Charter and Grievance Redressal Bill, 2011; Official Secrets Act of India, 1923; and the International NGO Accountability Charter. Previous years’ questions of IAS GS Mains Paper IV on “Ethics, Integrity & Aptitude” are given with focus on model questions of IAS GS Mains Paper IV: Ethics, Integrity & Aptitude for 2018.

Dr. B. Ramaswamy is a well-known Social Scientist. Till recently, he was Pro-Vice Chancellor of APG Shimla University, Himachal Pradesh. Currently he is a Legal Advisor to Members of Parliament. He has obtained all his qualifications from the reputed institutions and universities such as Loyola College, Delhi School of Economics, etc. Apart from his exemplary achievements in the field of Sociology, academically and professionally, he has several other qualifications and professional achievements in the fields of Disaster Management, Journalism and Mass Communication, Human Rights, IPR, Cyber Law, Personnel Management and Industrial Relations, Vedic Culture, Leadership, Issues of Women and Children, Disability Studies etc. He holds a Doctorate in Sociology from Singhania University, Honorary Doctorate from Cosmopolitan University, USA & Inter-American University of Humanistic Studies, Florida, USA, in the field of Social Science. He was also awarded Honorary Doctorate on Humanities in Apostolic International University, affiliated with and accredited by International Institute of Church Management Inc., Florida, USA. He has guided M. Phil. and Ph. D. scholars on his competent areas. He is a Visiting Fellow, Advisor, Member in several prestigious Institutions both in Government and Private such as IIT Roorkee, YASHADA, Raj Bhawan, Pune and NIPCCD, Govt. of India, Delhi. He has published different articles both in National and International magazines of repute. He continues to write articles to leading magazines and newspapers. Being a renowned Social Scientist, he is an invited Speaker to deliver key note addresses and Chief Guest to various functions, seminars, national and international conferences, Convocations and workshops. He travelled to more than 19 countries to deliver various areas of lectures. He motivates large number of youth including the school children. He makes tremendous impact while delivering each lecture which brings tremendous mind transformation to the youth of India towards nation building. He holds important positions in Government, viz. Member, Maintenance Tribunal- Maintenance and Welfare of Parents and Senior Citizen Act 2007. He also worked as Deputy Chief Warden- Civil Defence Corps, Delhi and as Director in very many Institutions and Private bodies. He was an acting Chairperson, Child Welfare Committee, Government of NCT, Delhi—A Bench of Magistrates constituted under Section 29 of Juvenile Justice. Being an expert Social Scientist and Educationist, he is interviewed regularly by the various electronic media, TV channels and Press. His passion is directed towards our Nation Building through Quality Education especially to those who are deprived of Quality education. He has so far produced more than over 1000 civil service officers in the country.

Dr. Sasikala Pushpa has been the Member of Parliament (Rajya Sabha). She completed her B.A. (English Literature) from University of Madras, Chennai and M.A. (Public Administration) from University of Madras, Chennai. She has also done a Diploma in Business Administration from the Southern Cross University, Singapore. Her Ph. D. in Public Administration is from Manonmaniam Sundaranar University, Tamil Nadu. She has been an ardent political and social worker, teacher and educationist. Earlier, she served as the Mayor of Thoothukudi Corporation, Tamil Nadu. She also held positions like: Member, Committee on Human Resource Development; Member, Committee of Privileges; and Member, Committee of Women and Children at national level. She is a proficient Bharatanatyam dancer. She enjoys coaching IAS aspirants. In this direction, she has also organized free IAS Training Centres in rural Tamil Nadu for the Below Poverty Line (BPL) youths; has provided career guidance to students in various colleges across Tamil Nadu; and has organized developmental activities for rural women to impart training, skills and to engage them in income generation activities. She has held positions like: Joint Secretary (Women Wing, A.I.A.D.M.K., 2009); Deputy Secretary (Youth Brigade Wing, A.I.A.D.M.K., 2010); and Secretary (Women Wing, A.I.A.D.M.K., 2013. She has been associated with development of sports in rural areas of Tamil Nadu. Countries visited by her include, South Korea (as a member of the delegation sponsored by the Government of South Korea for World Mayors Conference on Climate Change in 2013); South Africa (as a member of the delegation sponsored by the Government of South Africa for World Youth Conference in 2010); and Singapore. She specializes in research in research on British Administration. She is a prolific writer and commentator. She has been selected to go as a parliament delegates for the deliberation on 137th assembly of the Inter — Parliamentary Union in St. Petersburg, Russian Federation in 2017.