Return form will be sent to your email Id:
Want this item in next 24 hours?
Get an instant SMS with a link to download the Snapdeal App
+91
Please Enter a Valid 10 Digit Number.
Yes, Send Me A Link To The App
GET SMS
SDL552536035
{"SDL552536035":null}
Home
364, 4362, 4478, ,
/
Books
/
Non Fiction Books
/
Business, Investing & Management Books
/
The Intelligent Investor Paperback (English)
Compare Products
Clear All
Let's Compare!
Selection Error!
You have reached the maximum number of selection. You can select only upto 4 items to compare.
You have already selected this product.
OK
View Order 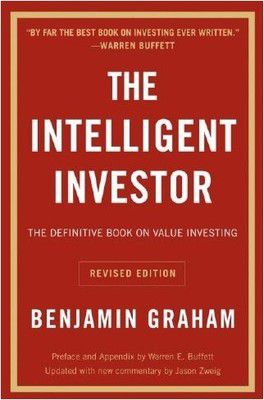 Ever looked at figures on the stock market and wondered what they were trying to say? Then this is the perfect book for you! The ‘Intelligent Investor(revised Edition)’, written by Benjamin Graham has been described as the ‘definitive guide’ to the stock market since its publication. It expands oh Grahams on philosophy ‘ value investing’ that helps the average citizen plan long-term investing and developing long-term strategies on avoiding error.

Despite being published in 1949, ‘Intelligent Investor(revised Edition)is still considered to be a bible for anyone who is looking to dabble in the stock market. This revised edition includes the views of Jason Zweig (a financial journalist) while keeping large parts of the original text intact.

Written in a simple style with every day examples that the average person  can relate to, the principles of finance are explained well. Get this book on Snapdeal and de-mystify those numbers today! This book has even been touted as the ‘best book on finance ever written’ by popular figures including Warren Buffet.

Benjamin Graham was an American economist you expounded business principles that have proven to be timeless. He has been described as the father of value investing. He was born in England but grew up in America. His first book was written in collaboration with David Dodd and published in 1934. It was called ‘Security Analysis.’ He has always written with the aim of explaining the most complicated theories as simply as possible.  Get this book for your competitive exams on Snapdeal today