Return form will be sent to your email Id:
Want this item in next 24 hours?
Get an instant SMS with a link to download the Snapdeal App
+91
Please Enter a Valid 10 Digit Number.
Yes, Send Me A Link To The App
GET SMS
SDL498905189
{"SDL498905189":null}
Home
364, 4362, 4478, ,
/
Books
/
Non Fiction Books
/
Business, Investing & Management Books
/
Zero To One (Paperback) (English)
Compare Products
Clear All
Let's Compare!
Selection Error!
You have reached the maximum number of selection. You can select only upto 4 items to compare.
You have already selected this product.
OK
View Order 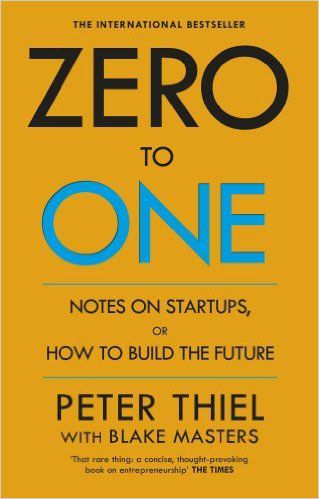 Zero To One (Paperback) (English)

WHAT VALUABLE COMPANY IS NOBODY BUILDING? The next Bill Gates will not build an operating system. The next Larry Page or Sergey Brin won't make a search engine. If you are copying these guys, you aren't learning from them. It's easier to copy a model than to make something new: doing what we already know how to do takes the world from 1 to n, adding more of something familiar. Every new creation goes from 0 to 1. This book is about how to get there. 'Peter Thiel has built multiple breakthrough companies, and Zero to One shows how.' ELON MUSK, CEO of SpaceX and Tesla 'This book delivers completely new and refreshing ideas on how to create value in the world.' MARK ZUCKERBERG, CEO of Facebook 'When a risk taker writes a book, read it. In the case of Peter Thiel, read it twice. Or, to be safe, three times. This is a classic.' NASSIM NICHOLAS TALEB, author of The Black Swan

About the Author:
Peter Thiel is a technology entrepreneur and investor best known for co-founding PayPal. Since then he has co-founded the data analytics firm Palantir Technologies, made the first outside investment in Facebook, provided early funding for companies like SpaceX, LinkedIn, Yelp, and Spotify, and established and funds the Thiel Foundation, which nurtures tomorrow's tech visionaries. He has appeared on 60 Minutes, CNBC, CBS Sunday Morning, Bloomberg News and been featured in the New Yorker, the Wall Street Journal, Forbes, Fortune, The Atlantic, USA Today, BusinessWeek, and more. Blake Masters is co-founder of Judicata, a technology startup that builds tools for legal research and analysis. Like Peter, Blake received undergraduate and law degrees from Stanford.

Zero To One (Paperback) (English)