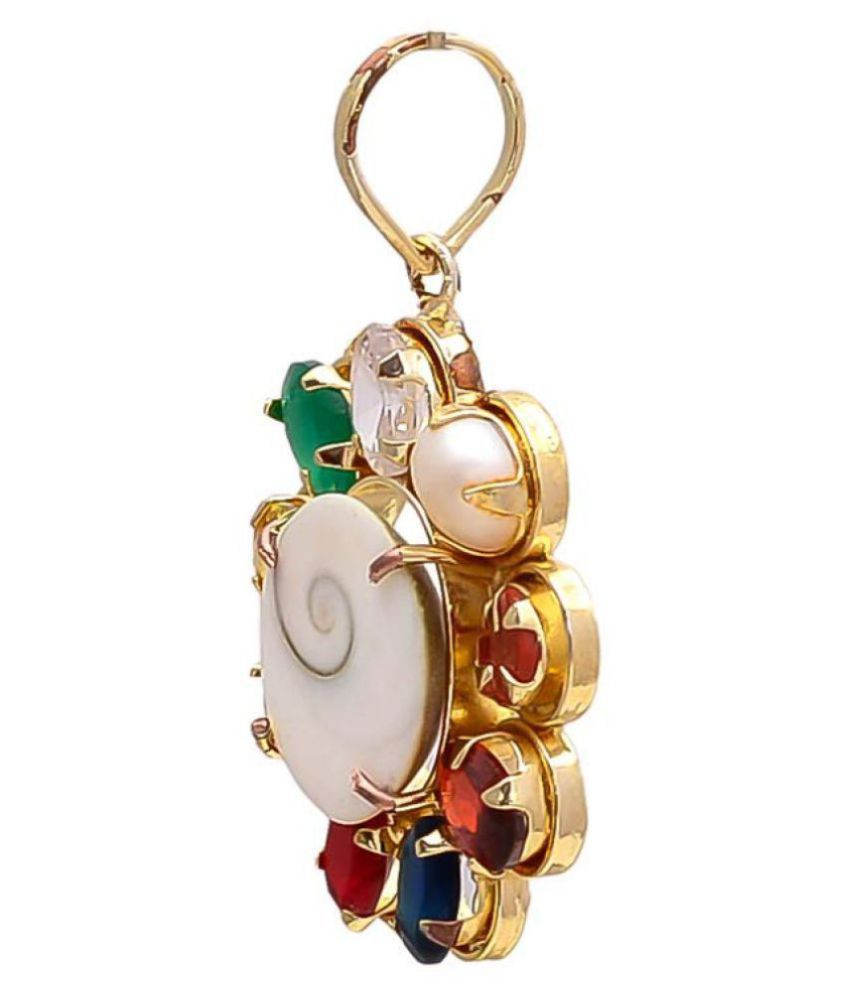 Navratna/Navratan Pendant With Gomti Chakra In The Centre For Health,Wealth & Good Fortune (1 Pc)-Navaratna refers to the nine gemstones related to the nine planets used in Vedic astrology. The word nava means ‘nine’ and ratna means ‘gem’ in the Sanskrit language. Navaratnas are considered auspicious and believed to give the wearer Good Health, Prosperity, Happiness and Peace of Mind. It wards off negative energies or malefic effects of Planets and strengthens the positive influences of the gems. Navaratna Ornaments can be worn by anyone and does not have any negative effects. It suits everyone irrespective of Zodiac and can be worn even without the recommendation from an Astrologer. Navaratna Jewelry should be made preferably of silver. It is believed that such an Ornament acts as a protective shield against various diseases and danger. When only one astrological gemstone is worn, it tends to focus only on a particular planet or a specific problem. But when navratnas are worn it brings the benefits of all the nine planetary gemstones simultaneously. Navaratna jewelry can be made with precious gems or semi-precious stones. According to Sri Garuda Purana When buying navratnas or any gem one has to ensure that the gem stones being used in the Ornament are flawless. It is also advisable to wear the ornament after cleaning and charging with Navagraha mantras and we want to ensure you that you will get the energized navratan pendant. The navaratan are-ruby,coral,emerald,yellow sapphire,zircon,blue sapphire,hassonite and cat`s eye.Gomti Chakra is a rare natural and spiritual product, a form of shell stone.Gomti Chakra is found in gomti River in Dwarka, a part of Gujarat in India. Gomti Chakra is also known as Sudarshan Chakra as it resembles the divine weapon of Lord Krishna - the Sudarshan Chakra.