Sorry! Be Careful What You Wish For is sold out. 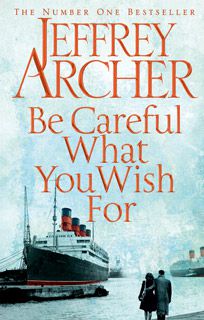 Be Careful What You Wish For

This product has been sold out
serviceCentreDetails
3.9 10 0 (3.9) 10 Ratings Have a question?
pay
Rs  398
We will let you know when in stock
notify me
Thank you for your interest

Synopsis Purchase the best work of fiction, Be Careful What You Wish For which is about Harry and Emma Clifton. The plot of Be Careful What You Wish For begins when they hear about their son Sebastian's car accident, they rush to the hospital unsure whether it was their son who died or his best friend Bruno. Meanwhile, Don Pedro schemes to install Major Alex Fisher into Ross Buchanan's seat as the chairman of the Barrington Shipping Company, a seat that Emma desires following Buchanan's forced retirement. The Barrington family firm is threatened by Pedro's intentions just as the firm stands to build its new luxury liner, the MV Buckingham. In London, Harry and Emma's adopted daughter finds love in the Slade Academy of Art. However all delight at the news of the wedding vanishes when an old friend, Lady Virgina Fenwick, appears. Events take a turn when a hitherto unknown Yorkshireman, Cedric Hardcastle, takes a place in the board of Barrington's firm, changing the lives of both families.
About the AuthorJeffrey Howard Archer, Baron Archer of Weston-super-Mare (born 15 April 1940) is an English author and former politician. Before becoming an author, Archer was a Member of Parliament (1969-1974), but resigned over a financial scandal that left him almost bankrupt.[2] Later, after a revival of his fortunes from the royalties of his best-selling novels, he became deputy chairman of the Conservative Party (1985-1986) before resigning after another scandal, which would lead to the end of his career in elected office.[3] He was made a life peer in 1992. His political career ended with his conviction and subsequent imprisonment (2001-2003) for perjury and perverting the course of justice, which followed his second resignation. His books have sold around 330 million copies worldwide.