Return form will be sent to your email Id:
Want this item in next 24 hours?
Get an instant SMS with a link to download the Snapdeal App
+91
Please Enter a Valid 10 Digit Number.
Yes, Send Me A Link To The App
GET SMS
SDL618155309
{"SDL618155309":null}
Home
364, 366, 4423, 46105644, ,
/
Books
/
Academic Texts
/
Engineering Books
/
Mechanical Engineering Books
/
Deadly Documents
Compare Products
Clear All
Let's Compare!
Selection Error!
You have reached the maximum number of selection. You can select only upto 4 items to compare.
You have already selected this product.
OK
View Order 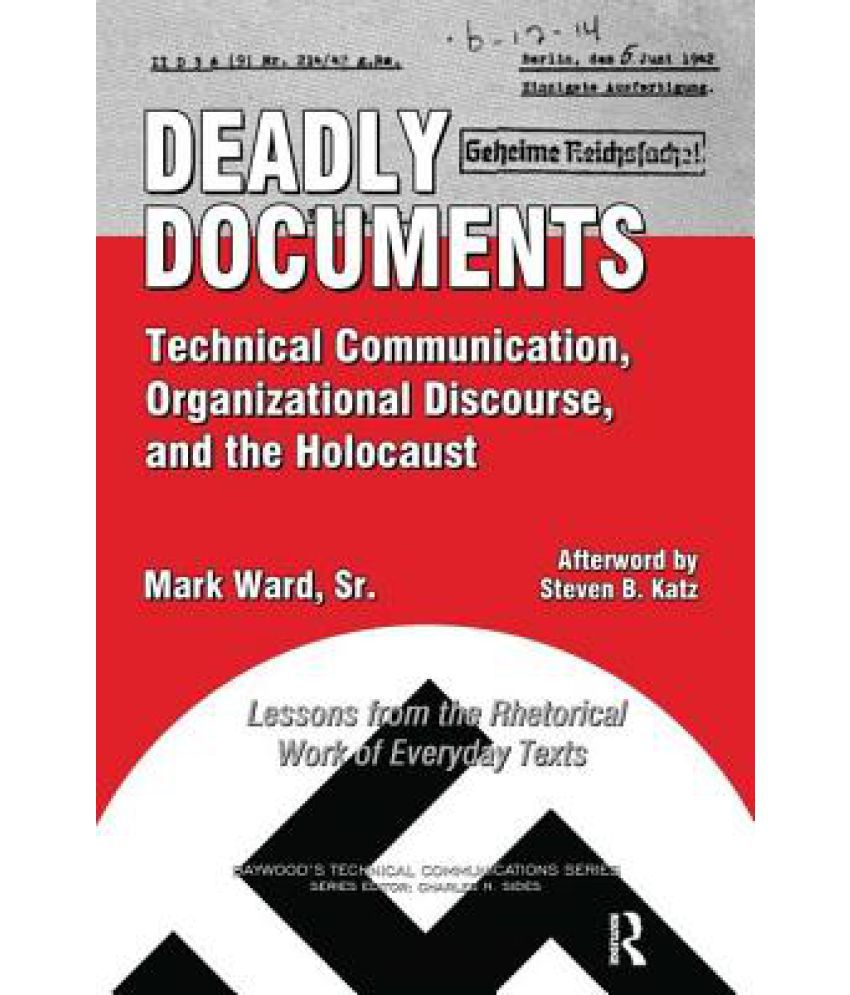 Scholars, teachers, and practitioners of organizational, professional, and technical communication and rhetoric are target audiences for a new book that reaches across those disciplines to explore the dynamics of the Holocaust. More than a history, the book uses the extreme case of the Final Solution to illumine the communicative constitution of organizations and to break new ground on destructive organizational communication and ethics. Deadly Documents: Technical Communication, Organizational Discourse, and the Holocaust Lessons from the Rhetorical Work of Everyday Texts starts with a microcosmic look at a single Nazi bureau. Through close rhetorical, visual, and discursive analyses of organizational and technical documents produced by the SS Security Police Technical Matters Group the bureau that managed the Nazi mobile gas van program author Mark Ward shows how everyday texts functioned as boundary objects on which competing organizational interests could project their own interpretations and temporarily negotiate consensus for their parts in the Final Solution.

The initial chapters of Deadly Documents provide a historical ethnography of the SS technical bureau by closely describing the institutional and organizational cultures in which it operated and relating organizational stories told in postwar testimony by the desk-murderers themselves. Then, through examination of the primary material of their documents, Ward demonstrates how this Social Darwinist world of competing Nazi bureaucrats deployed rhetorical and linguistic resources to construct a social reality that normalized genocide. Ward goes beyond the usual Weberian bureaucratic paradigm and applies to the problem of the Holocaust both the interpretive view that sees organizations as socially constructed through communication and the postmodern view that denies the notion of a preexisting social object called an organization and instead situates it within larger discourses.

The concluding chapters trace how contemporary scholars of professional communication have wrestled with the Nazi case and developed a consensus explanation that the desk-murderers were amoral technocrats. Though the explanation is dismissed by most historians, it nevertheless offers, Ward argues, a comforting distance between us and them. Yet, as Ward writes, First, we will learn more about the dynamic role of everyday texts in organizational processes. Second, as we see these processes perhaps inherent to all organized communities, including our own at work even in the extreme case of the SS Technical Matters Group, the comforting distance that we now maintain between them and us is necessarily diminished. And third, our newfound discomfort may open productive spaces to revisit conventional wisdoms about the ethics of technical and organizational communication.