Sorry! Designs from Indian Textile, Chintz- Kalamkari is sold out. 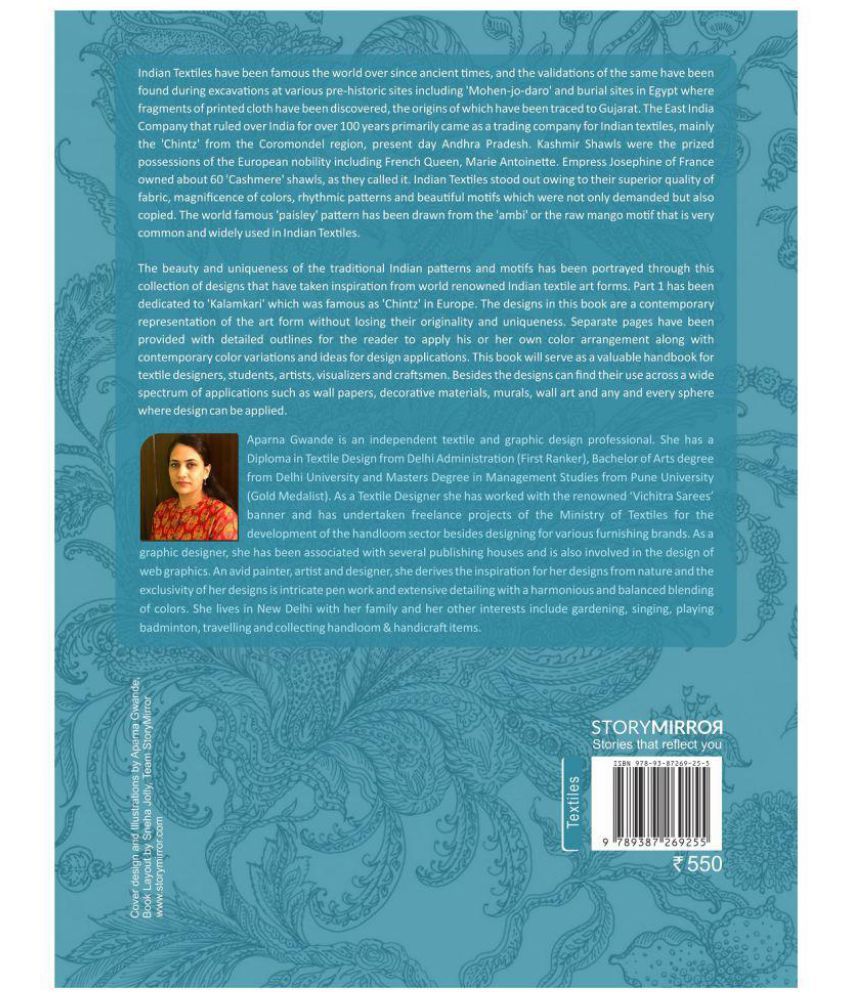 This product has been sold out
serviceCentreDetails
Be the first to review
Have a question?
pay
Rs  550
We will let you know when in stock
notify me
Thank you for your interest

About Book Indian Textiles have been famous the world over since ancient times, and the validations of the same have been found during excavations at various pre-historic sites including 'Mohen-jo-daro' and burial sites in Egypt where fragments of printed cloth have been discovered, the origins of which have been traced to Gujarat. The East India Company that ruled over India for over 100 years primarily came as a trading company for Indian textiles, mainly the 'Chintz' from the Coromondel region, present day Andhra Pradesh. Kashmir Shawls were the prized possessions of the European nobility including French Queen, Marie Antoinette. Empress Josephine of France owned about 60 'Cashmere' shawls, as they called it. Indian Textiles stood out owing to their superior quality of fabric, magnificence of colors, rhythmic patterns and beautiful motifs which were not only demanded but also copied. The world famous 'paisley' pattern has been drawn from the 'ambi' or the raw mango motif that is very common and widely used in Indian Textiles. The beauty and uniqueness of the traditional Indian patterns and motifs has been portrayed through this collection of designs that have taken inspiration from world renowned Indian textile art forms. Part 1 has been dedicated to 'Kalamkari' which was famous as 'Chintz' in Europe. The designs in this book are a contemporary representation of the art form without losing their originality and uniqueness. Separate pages have been provided with detailed outlines for the reader to apply his or her own color arrangement along with contemporary color variations and ideas for design applications. This book will serve as a valuable handbook for textile designers, students, artists, visualizers and craftsmen. Besides the designs can find their use across a wide spectrum of applications such as wall papers, decorative materials, murals, wall art and any and every sphere where design can be applied. About Author: An independent textile and graphic design professional, the author has a Diploma in Textile Design from Delhi Administration (First Ranker), Bachelor of Arts degree from Delhi University and Masters Degree in Management Studies from Pune University (Gold Medalist). As a Textile Designer she has worked with the renowned ‘Vichitra Sarees’ banner and has undertaken freelance projects of the Ministry of Textiles for the development of the handloom sector besides designing for various furnishing brands. As a graphic designer, she has been associated with several publishing houses and is also involved in the design of web graphics. An avid painter, artist and designer, she derives the inspiration for her designs from nature and the exclusivity of her designs is intricate pen work and extensive detailing with a harmonious and balanced blending of colors. She lives in New Delhi with her family and her other interests include gardening, singing, playing badminton, travelling and collecting handloom & handicraft items.