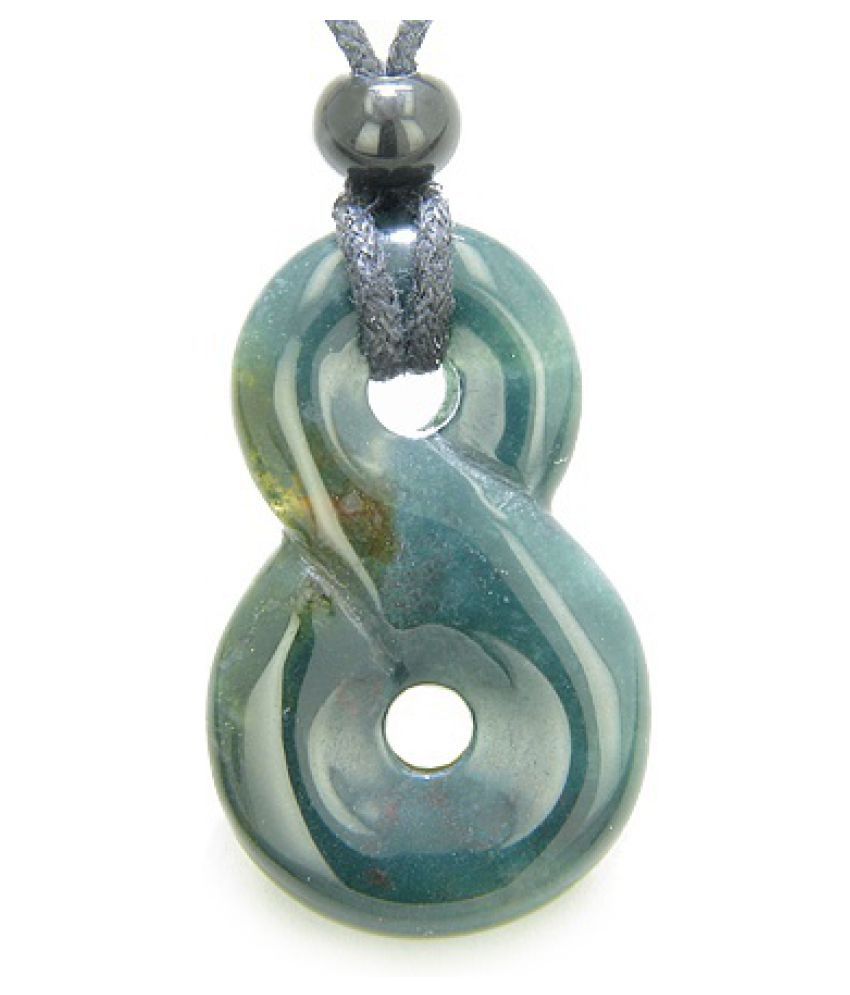 Magic Amulet hand carved as Infinity Symbol TotemInfinity Charm made from Genuine and Natural Indian Agate GemstoneGemstone Charm Size: 1 ½ inches longComes with Adjustable Necklace, Shortest: 15 inches, Longest: 24 inchesMagic Amulet hand carved as Infinity Symbol Totem. Infinity Charm made from Genuine and Natural Indian Agate Gemstone. Gemstone Charm Size: 1 ½ inches long. Comes with Adjustable Necklace, Shortest: 15 inches, Longest: 24 inches. This is One of the Kind and Unique Infinity Totem Necklace. It is Hand Carved from Genuine and Natural Indian Agate Gemstone. Indian Agate also holds powers of Good Luck and Positive Energy. Infinity Symbol Meaning: This unique symbol represents Infinite Powers, which are transformed directly to the owner. Infinity Symbol also represents Eternity. In Ancient India and Tibet it represented Perfection, Unity and Infinite Possibilities. It is Linked to Magic and Represents Balance of Various Forces. In modern times, it became a secular mathematical symbol for infinity in numbers, time or space and used by many people to attract Universe Powers of Positive Energy, Infinite Good Luck and Protection. Stay Lucky and Unique with your Own Individual Infinity Amulet. GOOD LUCK and NATURAL Powers of AGATE Gemstone: Agate known as a Good Luck stone. It Brings Peace and Happiness. Agate is a Protective stone. Its protective energies are more gentle and subtle than some stones. It can be particularly effective when calling upon Angels for protection. Inspiration is another hallmark of blue lace agate and that can assist in inner attunement, and has been said to be useful for performing Miracles. As well it balances Yin-Yang energy. It can help bring stronger intuition and inner knowing. Blue lace agate is considered a stone of communication. Agates have long been thought Magical, curing everything from thirst, the evil-eye and bad dreams. Agate foster Good Luck, Love, truthfulness, courage, bravery, strength, abundance, wealth, longevity, acceptance, protection, balance, harmony, generosity, security, Persuasiveness, agreeability, congeniality, compatibility, creativity, acquiring wealth.