Return form will be sent to your email Id:
Want this item in next 24 hours?
Get an instant SMS with a link to download the Snapdeal App
+91
Please Enter a Valid 10 Digit Number.
Yes, Send Me A Link To The App
GET SMS
SDL158885605
{"SDL158885605":null}
Home
217, 129, 3467, ,
/
Home Decoratives
/
Religion & Spirituality
/
Pooja Accessories
/
KANISHQ SAMPOORNA KUBER YANTRA
Compare Products
Clear All
Let's Compare!
Selection Error!
You have reached the maximum number of selection. You can select only upto 4 items to compare.
You have already selected this product.
OK
View Order 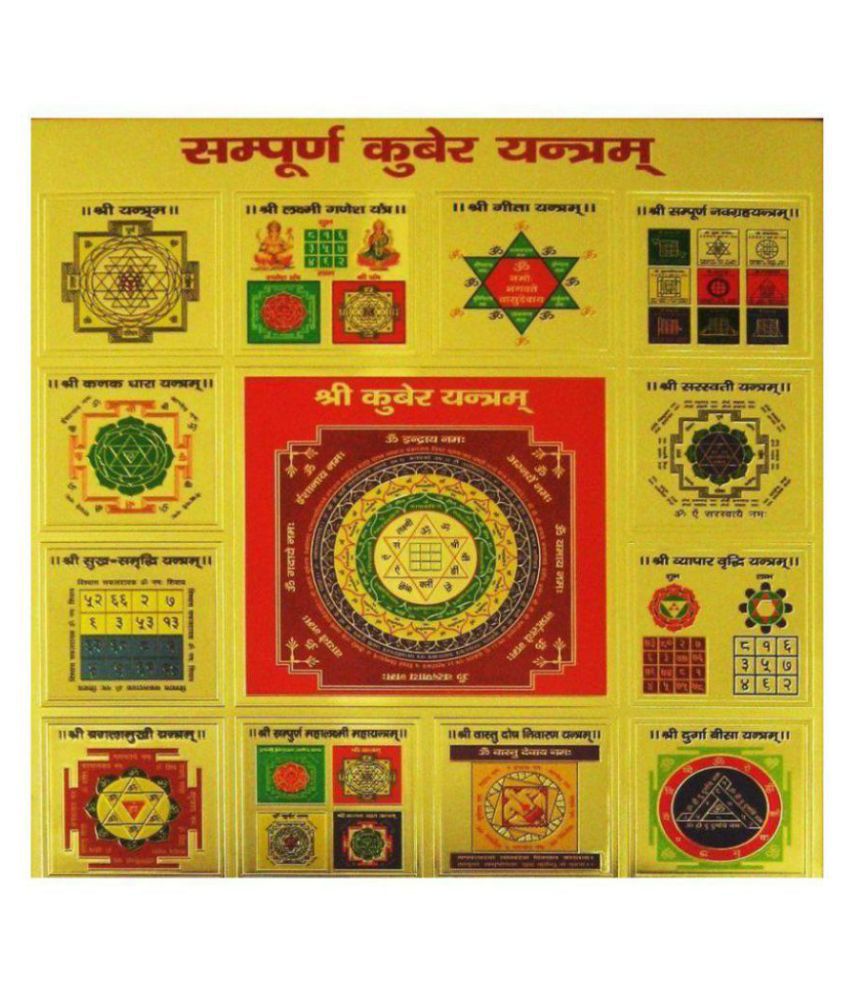 Made on thick golden paper sheet.Relevant colors are used which amplify the power of the yantra. Lord Kuber is the God of wealth and money, and denotes wealth, money and success in business as well as acquisition and accumulation of wealth. It opens up avenues for new sources of income; increases fund flow & encourage accumulation of wealth. This Yantra is recommended for growth in business, career & profession as well as increase in income & wealth. It bestows wealth, prosperity and good fortune on the owner of this Yantra. Worship of Kuber Yantra gives the worshipper all these results. Kuber Yantra draws extreme positivity and growth. It opens up new avenues of money inflow encouraging accumulation of wealth. It leads to great financial stability and lavish lifestyle and improves material possession.It brings prosperity and success in professional as well as personal life.It blesses the wearer with good luck and sways away all the misfortune. Lord Kuber is the supreme deity of wealth and prosperity. Lord Kuber is considered to be the "banker" of the heaven. Kuber yantra is worshipped for monetary gains, financial stability, prosperous business, etc. All the ancient scriptures encourage the practice of Kuber Sadhana for gaining and accumulating wealth. Lord Kuber is the lord of all the treasures on earth and even rules over the riches buried and unclaimed inside the earth. Kuber yantra is worshipped and propitiated for quick financial gains, unexpected gain of money through lotteries etc and a prosperous business. Kuber yantra is the basis of gain of unlimited wealth and prosperity. According to Ramayana, Kuber made the golden Lanka, which was taken by his brother Ravan. Kubera was rewarded by Lord Siva with the post of being one of the guards of the eight directions - the North. Kubera is mostly painted with his family and seen showering gold coins and navaratnas. Without His consent, even Mahalaxmi cannot give wealth. Lord Kubera is also known as Dhanapati (Lord of Riches). Kubera is the trustee of all wealth and food grains, whereas creation of wealth and bestowal belongs to Lakshmi. Kubera is the son of Visrava and is the grandson of Brahma, the Creator, and is known by the patronymic, Vaisravana. He is the Lord of Yakshas, devotee of Lord Shiva and is known as the best among Yakshas. Kuber yantra blesses with wealth and prosperity, faster recovery of dues and opens new avenues of growth and expansion. Design: Made on thick golden paper sheet. Relevant colors are used which amplify the power of the yantra.