Return form will be sent to your email Id:
Want this item in next 24 hours?
Get an instant SMS with a link to download the Snapdeal App
+91
Please Enter a Valid 10 Digit Number.
Yes, Send Me A Link To The App
GET SMS
SDL208990435
{"SDL208990435":null}
Home
364, 366, 4422, 46105660, ,
/
Books
/
Academic Texts
/
Science Books
/
Earth Sciences Books
/
The Theory Of Everything Paperback (English)
Compare Products
Clear All
Let's Compare!
Selection Error!
You have reached the maximum number of selection. You can select only upto 4 items to compare.
You have already selected this product.
OK
View Order 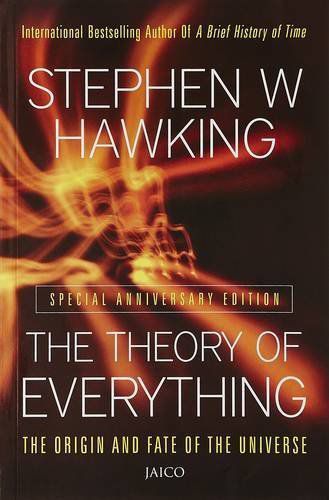 The Theory Of Everything Paperback (English)

Synopsis
With a title inspired as much by Douglas Adams' Hitchhiker series as Einstein, The Theory of Everything delivers almost as much as it promises. Transcribed from Stephen Hawking's Cambridge Lectures, the slim volume may not present a single theory unifying gravity with the other fundamental forces, but it does carefully explain the state of late 20th-century physics with the great scientist's characteristic humility and charm. Explicitly shunning math, Hawking explains the fruits of 100 years of heavy thinking with metaphors that are simple but never condescending--he compares the settling of the newborn universe into symmetry to the formation of ice crystals in a glass of water, for example. While he explores his own work (especially when speaking about black holes), he also discusses the important milestones achieved by others like Richard Feynman. Though occasionally an impenetrably obscure phrase does slip by, the reader will find the bulk of the text enlightening and engaging. The material, from the nature of time to the possibility that the universe has no beginning or end, is rich and deep and inevitably ignites metaphysical thinking. After all, Hawking is famous for his we would know the mind of God remark, which ends the final lecture herein. In The Theory of Everything series of lectures Stephen W.Hawking tries to give an outline of what we think is the history of the universe from the big bang to black holes. The first lecture briefly reviews past ideas about universe and how we got to our present picture. One might call this the history of the universe. The second lecture describes how both Newton s and Einstein s theories of gravity led to the conclusion that the universe could not be static: it had to be either expanding or contracting. This, in turn, implied that there must have been a time between ten and twenty billion years ago when the density of the universe was infinite. This is called the big bang. It would have been the beginning of the universe. The third lecture talks about the black holes. These are formed when a massive star or an even larger body collapses in on itself under it s own gravitational pull. According to Einstein's general theory of relativity, any one foolish enough to fall into a black hole will be lost forever. They will not be able to come out of the black hole again. Instead, history, as far as they are concerned will come to a sticky end at a singularity. However, general relativity is a classical theory that is, it does not take into account the uncertainty principle of quantum mechanics. The fourth lecture describes how quantum mechanics allows energy to leak out of black holes. Black holes are not as black as they are painted. The fifth lecture shall apply quantum mechanical ideas to the big bang and the origin of the universe. This leads to the idea that space-time may be finite in extent but without boundary or edge. It would be like the surface of the earth but with two more dimensions. The sixth lecture shows how this boundary proposal could explain why the past is so different from the future, even though the laws of physics are time symmetric. Finally, in the seventh lecture Stephen W.Hawking describes how we are trying to find a unified theory that will include quantum mechanics, gravity etc.

About the Author
Stephen William Hawking (born 8 January 1942) is an English theoretical physicist, cosmologist, Author and Director of Research at the Centre for Theoretical Cosmology within the University of Cambridge. Hawking was born on 8 January 1942 in Oxford, England, to Frank (1905-1986) and Isobel Hawking. Hawking suffers from a rare early-onset slow-progressing form of amyotrophic lateral sclerosis (ALS), also known as motor neuron disease or Lou Gehrig's disease, which has gradually paralyzed him over the decades.

The Theory Of Everything Paperback (English)