Return form will be sent to your email Id:
Want this item in next 24 hours?
Get an instant SMS with a link to download the Snapdeal App
+91
Please Enter a Valid 10 Digit Number.
Yes, Send Me A Link To The App
GET SMS
SDL794010791
{"SDL794010791":null}
Home
217, 129, 3467, ,
/
Home Decoratives
/
Religion & Spirituality
/
Pooja Accessories
/
Vedic Vaani Golden Navgraha Frame
Compare Products
Clear All
Let's Compare!
Selection Error!
You have reached the maximum number of selection. You can select only upto 4 items to compare.
You have already selected this product.
OK
View Order 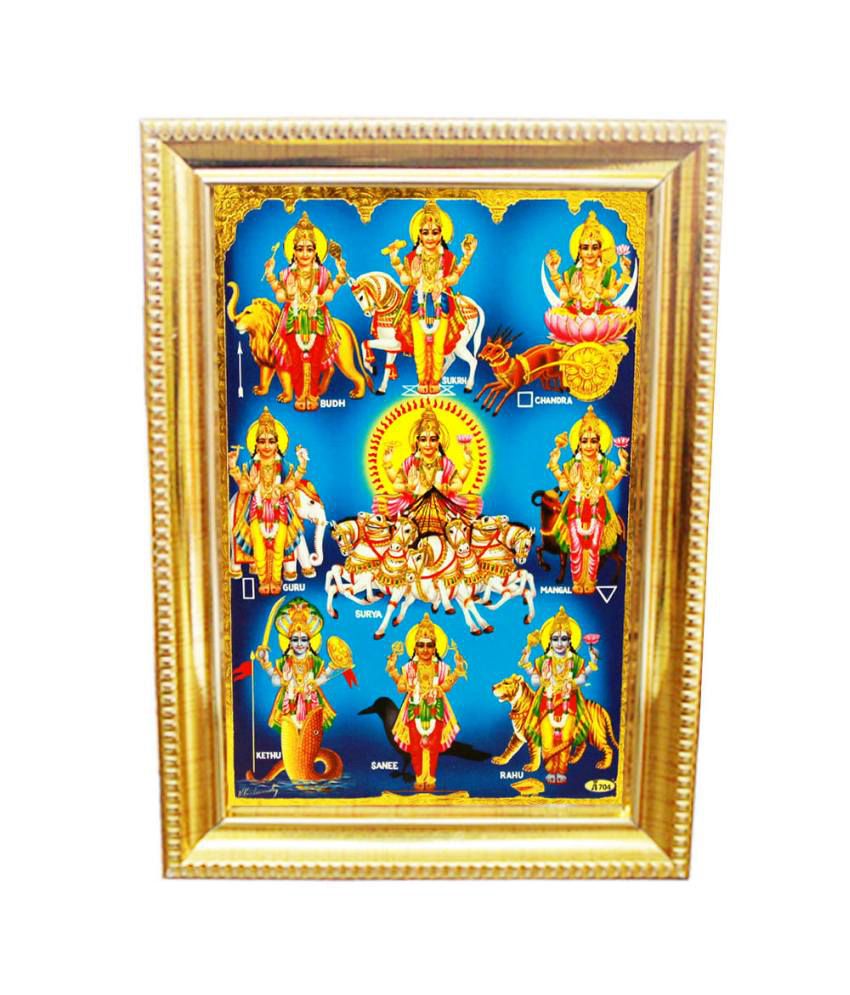 The Navagrahas are the nine major planets. They are considered to play a major role in deciding the destiny of man. The Navagraha derived from the Sanskrit words "Nava" and "Graha". Nava means "nine", Graha means " planet. The Navagraha Gods are Surya(Sun), Chandra(Moon), Mangal(Mars), Budha(Mercury), Guru(Jupiter), Shukra(Venus), Shani(Saturn), Rahu and Ketu. The Lords of these planets are named after the planets themselves and they are worshipped in almost every aspect of Hinduism from a simple puja to an elaborate yagna or wedding. Worship of these deities brings forth blessings in the form of protection and success in various undertakings. The Navagraha are typically placed in a single square with the Sun (Surya) in the center and the other deities surrounding Surya; no two of them are made to face each other. In Agama Prathishta, Surya occupies the central place, Chandra on Surya's east, Budha on his south, Brihaspati on his west, Shukra on his north, Mangala on his south-east, Shani on his south-west, Rahu on north-west and Ketu in the north-east. In vedic astrology movement of the Navagrahas is considered to have a major role in influencing the fortunes of any individual. In order to mitigate the negative effects of a planet which is debilated in the birth chart or to provide more potency to a planet that is in an exalted state, believers undertake pilgrimage to designated Navagraha temples. Invoke the blessings of Navgraha wooden photo frame by installing this photo in your puja altar, prayer room, office cabin or living area. Design: Printed on high quality photo paper with wooden photo frame.