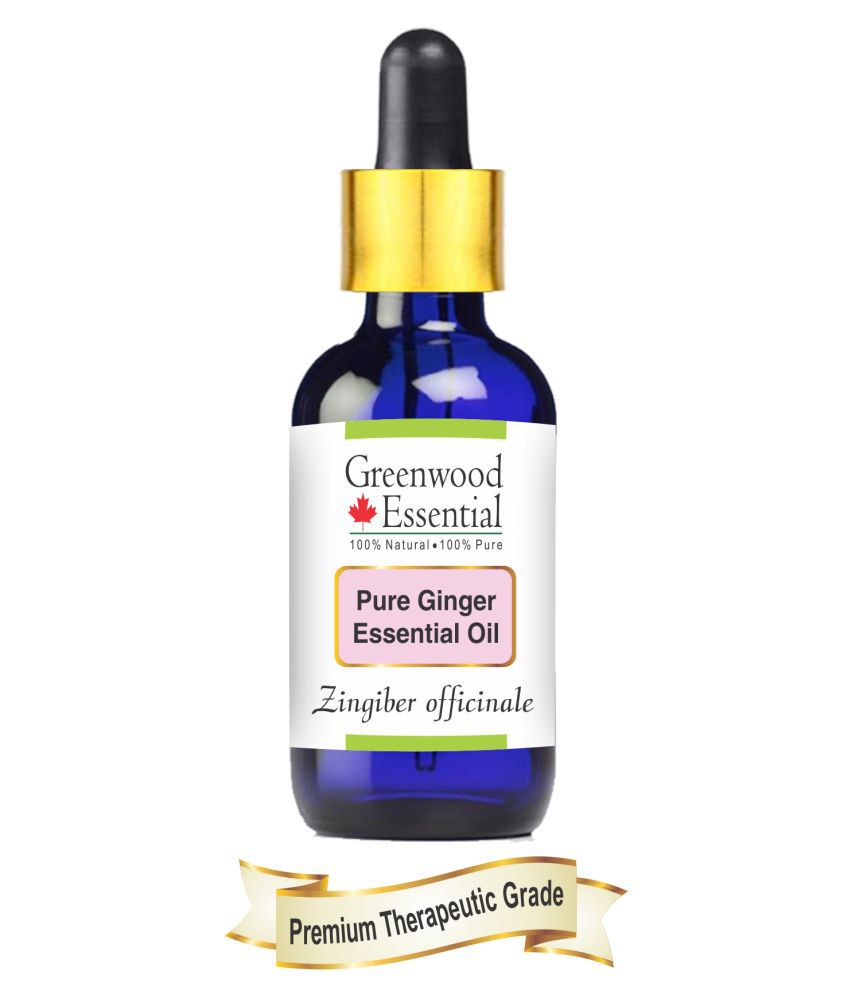 Pure Ginger Essential Oil (Zingiber officinale) Ginger Oil (Zingiber officinale) has a warm, spicy fragrance that is energizing. Supportive of the digestive system, Ginger Oil is commonly used to soothe, comfort, and balance digestive discomfort, heart burn etc. Ginger Oil is also used in the treatment of fractures, rheumatism, arthritis, bruising, carbuncles, cramps, travel and sea sickness, colds and flu, sores on the skin. Health Benefits Stomach: Ginger root and Ginger Oil are often used for upset stomachs. It is one of the best remedies for indigestion, stomach ache, dyspepsia, colic, spasms, diarrhea, flatulence and other stomach and bowel related problems. Ginger or Ginger Oil is often added to recipes, especially in India, as it helps in improving digestion. Ginger tea is also used for relieving stomach problems. Furthermore, it can increase your appetite, which is great for people who are trying to put on weight. Food Poisoning: Ginger Oil is an antiseptic and carminative substance. As a result, it can be used to treat food poisoning. It is also used for treating intestinal infections and bacterial dysentery. Nausea and Vomiting: Research has shown that Ginger root and its Oil are also effective against nausea, motion sickness and vomiting. Use of ginger may also result in a reduction of -related vomiting in women. Malaria: Ginger root and Ginger Oil are also effective against yellow fever and malaria. Respiratory disorders: Since Ginger root and Ginger Oil are both good expectorants, they are effective in treating various respiratory problems such as cold, cough, flu, asthma, bronchitis and breathlessness. Ginger Oil is very effective in removing mucus from the throat and lungs, so it is often added to tea in India. The health benefits of honey and Ginger Oil in treating respiratory problems is well known. Inflammation and Pain: The extract of ginger is often used in traditional medicine to reduce inflammation. Research has now proven that its anti-inflammatory properties can be attributed to the presence of a substance named Zingibain. It is gesic in nature and reduces the pain caused by muscle aches, arthritis, rheumatic conditions, headaches, and migraines. Ginger Oil or Ginger paste is often topically massaged on aching muscles to remove muscle strain. It is further believed that regular use of Ginger Oil leads to the reduction of prostaglandins, which are the compounds associated with pain. Therefore, Ginger Oil helps in pain relief. Recently, a few Chinese researchers have reported that ginger can be very effective in treating inflammation of the s. Stress: Ginger Oil, being an essential Oil, is stimulating and therefore relieves depression, mental stress, exhaustion, dizziness, restlessness and anxiety. Kidney: It is also believed that Ginger root juice is able to dissolve kidney stones. Hair care: Ginger Oil is useful for hair care as well. Ginger juice is useful in controlling dandruff. It should be noted that ginger Oil is very strong and should therefore be used carefully and sparingly. Ginger Oil blends well with many other essential Oils including Lemon, cedarwood, lime, eucalyptus, frankincense, geranium, rosemary, sandalwood, patchouli, myrtle, bergamot, rosewood, neroli, orange and ylang-ylang.